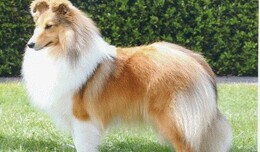 It is known that Shetland Sheepdog have been in Ireland since the 1930's, some brought in as pets coming to live here; others brought in to breed from, as with the Earl of Kenmare, probably the first breeder in Ireland.

By 1946 up to eight or ten Shetlands were appearing regularly in the " Any Variety" classes at Championship Shows, and the owners of these, first discussed forming a Club for the Breed one day at a Show held in Millltown, run by the Combined Canine Society; the Club was named" The All Ireland Shetland Sheepdog Club", and it was formally accepted by, an affiliated to the Irish Kennel Club in 1948.

Our goal is to produce dogs in conformance with the official breed standard, uniform in type, sound of mind and body and well suited to their original purpose. The welfare of individual Shetland Sheepdog and welfare of the breed are paramount and as a whole govern our behaviour in all aspects of breeding, exhibition and marketing.

The club's aim through this website is to provide a facility which will give many Sheltie enthusiasts both here in Ireland and throughout the world the opportunity to join with the A.I.S.S.C. in this pursuit.  With these aims in mind we welcome you to The All Ireland Shetland Sheepdog Club's website. -ENJOY YOUR VISIT-